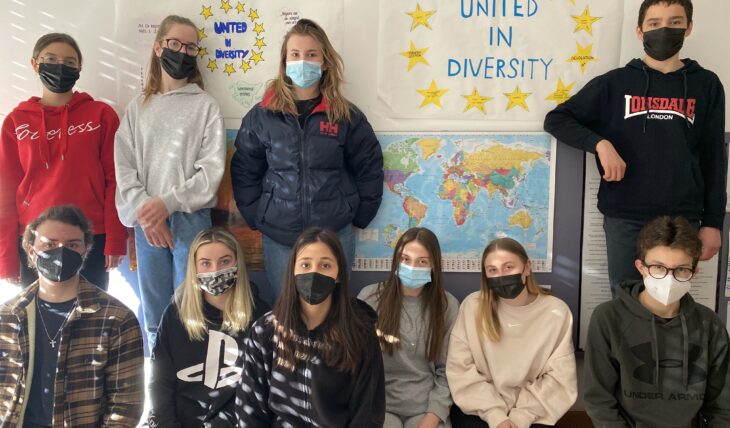 We, the class 3TS4 of the Euregio-direction of the FOS “Marie Curie” Meran, have been participating in the project “Schools Beyond Regions and Borders” (2021-2023) since October 2021.  It was launched in February 2021 with the support of the region “Trentino – Alto Adige/Südtirol”, the University of Trento and the “Fondazione Bruno Kessler” and others. Schools from other parts of Europe such as Germany, Austria, Bosnia-Herzegovina and Ireland are also taking part in the project. The general aim is to promote interaction and mutual understanding between European students and teachers. The main topic this year is to encourage respect for minorities. Accordingly, our first lecture was called “100 years of Sarajevo”. Did you know that Bosnia-Herzegovina is divided into two semi-autonomous regions and that there are three main ethnic groups, (bosniaks, serbs, and croats) and 17 minorities? Or that they have three different presidents and one of the most complicated systems of government? (We did not know that either!) For these reasons, Bosnia-Herzegovina is a mixed community which each of the groups unfortunately having different intentions. Recently, headlines like “Bosnia is in danger of breaking up” have alarmed European officials as the prospects for further division and conflict are very real. We are now looking forward to the next seminar which will further explore “the case of Tirol”.

This website uses cookies to improve your experience while you navigate through the website. Out of these cookies, the cookies that are categorized as necessary are stored on your browser as they are essential for the working of basic functionalities of the website. We also use third-party cookies that help us analyze and understand how you use this website. These cookies will be stored in your browser only with your consent. You also have the option to opt-out of these cookies. But opting out of some of these cookies may have an effect on your browsing experience.
Necessary immer aktiv
Necessary cookies are absolutely essential for the website to function properly. This category only includes cookies that ensures basic functionalities and security features of the website. These cookies do not store any personal information.
Non-necessary
Any cookies that may not be particularly necessary for the website to function and is used specifically to collect user personal data via analytics, ads, other embedded contents are termed as non-necessary cookies. It is mandatory to procure user consent prior to running these cookies on your website.
SPEICHERN & AKZEPTIEREN